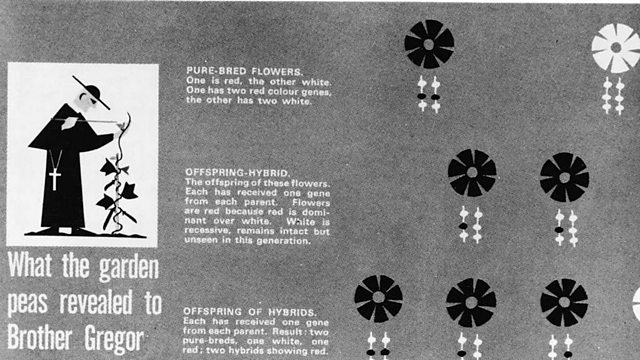 Melvyn Bragg discusses the development of the science of genetics, from the early work of Gregor Mendel to modern research on genes and heredity.

Melvyn Bragg looks at the development of the science of genetics. In the 1850s and 60s, in a monastery garden in Burno in Moravia, a Franciscan monk was cultivating peas. He began separating the wrinkly peas from the shiny peas and studying which characteristics were passed on when the next crop of peas were grown. In this slow and systematic way Gregor Mendel worked out the basic law of heredity and stumbled upon what was later to be described as the fundamental unit of life itself…the gene.But Mendel’s work was ignored when he published his findings in 1865, and it was not until the 20th century that he was rediscovered and the science of genetics was born. What effect did the discovery of the gene have on Darwin’s ideas? How do our genes work upon us, and how can we manipulate them?With Steve Jones, Professor of Genetics and Head of the Galton Laboratory at University College London, Richard Dawkins, Charles Simonyi Professor of the Public Understanding of Science at Oxford University and the genetic scientist Linda Partridge, NERC Research Professor at the Galton Laboratory, University College London.