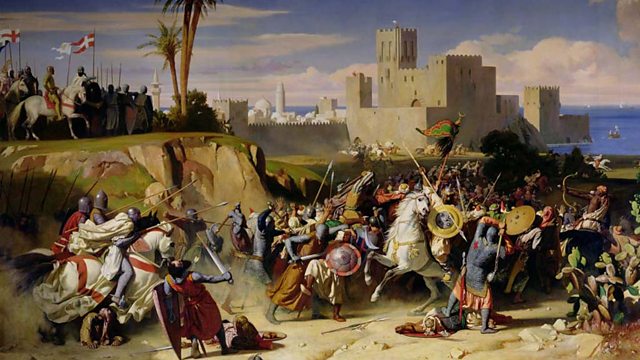 Melvyn Bragg discusses the Third Crusade, from death of the Holy Roman Emperor, Frederick Barbarossa, to the famous encounter between Richard I and Saladin.

Melvyn Bragg and guests discuss the highs and lows of the Third Crusade. In 1095 Pope Urban II launched the First Crusade and by the end of the 11th century an army of Franks had driven what they called the ‘infidel arab’ out of Jerusalem. The Crusaders held the city for over eighty years until Saladin, Sultan of Egypt and Syria, seized it back in 1187. The Muslim world celebrated as the Christian world shuddered and Pope Gregory VIII issued a Papal Bull for restoring the Holy City to Christian Rule. The Kings of Europe clamoured for the honour to take up the challenge. However, the Third Crusade did not get off to a ripping start. The Holy Roman Emperor, Frederick Barbarossa, set off at the head of the greatest crusader army ever assembled but drowned whilst crossing a small stream in Armenia. This left Phillip of France and ultimately Richard of England to take on Saladin’s supremacy in the Middle East. What happened in that famous encounter? How did the names of Saladin and Richard the Lionheart come to bear such a weight of reputation across the centuries and were the crusades racial, imperial or religious wars? With Jonathan Riley-Smith, Dixie Professor of Ecclesiastical History at Cambridge University and author of many books on the Crusades, Carole Hillenbrand, Professor of Islamic History at the University of Edinburgh, Tariq Ali, novelist, playwright and author of The Book of Saladin.