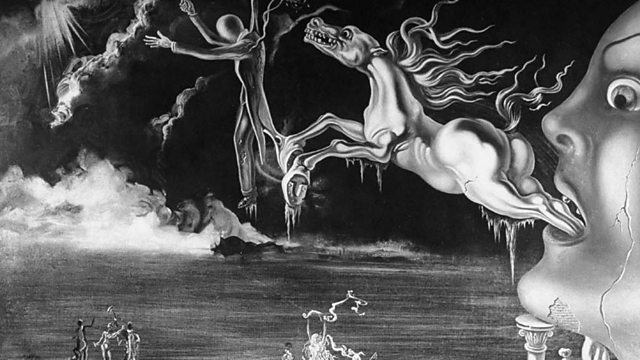 Melvyn Bragg discusses surrealism, the art of the unconscious, repression, desire and sex.

Melvyn Bragg and guests discuss surrealism. ‘Si vous aimez L’amour, vous aimerez Surrealisme!’. If you like Love, you’ll love Surrealism! Thus was the launch of the surrealist manifesto publicised in Paris in 1924. In that document the formerly Dadaist poet André Breton defined his new movement, “Surrealism is pure psychic automatism, by which it is intended to express…the real process of thought. It is the dictation of thought, free from any control by reason and of any aesthetic or moral preoccupation”.Surrealism is about sex, the unconscious, repression and desire and seems to carry more than a distant echo of the Doctor from Vienna. How much was their notion of ‘pure thought’ influenced by the writings of Sigmund Freud and the new technique of psychoanalysis being developed at the time? Did the surrealists manage to release the secrets and wonders of the human psyche, or was their wild foray into melting clocks, floating euphoniums and automatic writing simply a wasted journey into nonsense?With Dawn Adiss, Professor of Art History and Theory at the University of Essex; Malcolm Bowie, Marshal Foch Professor of French Literature at Oxford University and a fellow of All Souls College; the psychoanalyst Darian Leader