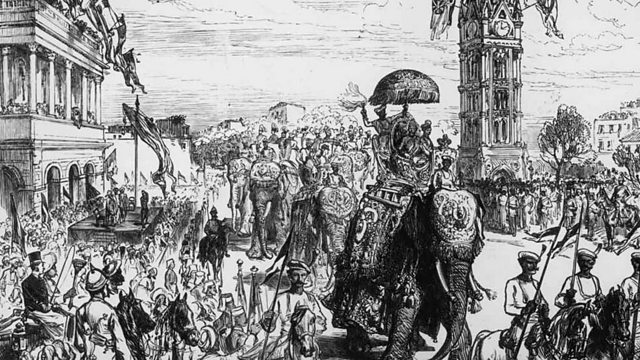 Melvyn Bragg discusses the British Empire, what drove Britain to follow the imperial road and what was its legacy?

Melvyn Bragg examines the British Empire. It was officially created on 1st January 1877 when Disraeli had Queen Victoria proclaimed Empress of India, and it formally dissolved into the ‘Commonwealth’ in 1958. But imperial passions stirred in Britain long before Victoria’s investiture and the ethos of Imperialism lives on.At its height in 1919 the British Empire stretched from East to West, incorporating one quarter of the globe and included such diverse colonies as Canada, Australia, parts of South America, the Persian Gulf, the Middle East and China, New Zealand, much of Africa and of course India. By 1960 it had all but vanished off the face of the earth. What drove Britain to build such an immense Empire, why did it all disappear so quickly and what kind of legacy was left behind? With Maria Misra, Lecturer in Modern History and Fellow of Keble College, Oxford, Peter Cain, Research Professor in History at Sheffield Hallam University and Catherine Hall, Professor of Modern Social and Cultural History at University College London.