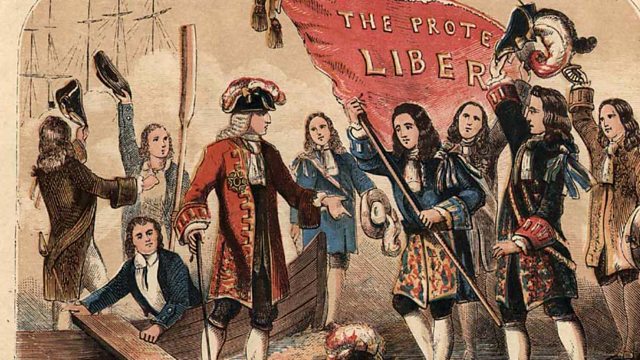 Melvyn Bragg examines the Glorious Revolution of 1688 but were the events of 1688 really either Glorious or Revolutionary?

Melvyn Bragg and guests discuss the the Glorious Revolution. In 1688, with a fair wind behind him and no naval opposition in front, William of Orange and his Dutch fleet sailed safely into Torbay on the South coast and thus began a period of history known - in England at least - as The Glorious Revolution. The story goes that the English, fed up with their Catholic King James II and alarmed at the prospect of a Catholic succession, ‘invited’ William to come to England and save Parliament, Protestantism and the rights of ordinary citizens. William was cheered all the way to London where, with the backing of Parliament and the people, he and his wife Mary were installed as joint sovereign monarchs of England, Ireland and Scotland. Victorian historians like Macaulay claimed that this was the era that defined British democracy, but how much of the spirit of 1688 is enwrapped within our unwritten Constitution? Were the events of 1688 really either Glorious or Revolutionary?With John Spurr, Reader in History at the University of Wales, Swansea; Rosemary Sweet, Lecturer in Economic and Social History at the University of Leicester; Scott Mandelbrote, Fellow and Director of Studies at Peterhouse, Cambridge.