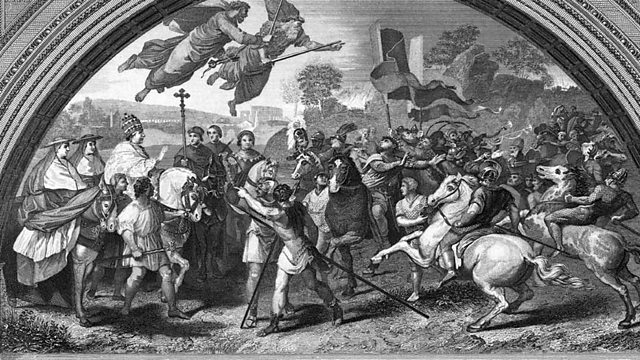 Melvyn Bragg discusses the causes and events leading to the fall of the Roman Empire in the 5th century and assesses the role of Christianity, the Ostrogoths, the Visigoths and the Vandals.

Melvyn Bragg and guests discuss the causes of the fall of the Roman Empire. Edward Gibbon wrote of its decline, "While that great body was invaded by open violence, or undermined by slow decay, a pure and humble religion gently insinuated itself into the minds of men, grew up in silence and obscurity, derived new vigour from opposition, and finally erected the triumphant banner of the cross on the ruins of the Capitol."But how far is the growth of Christianity implicated in the destruction of the great culture of Rome? How critical were the bawdy incursions of the Ostrogoths, the Visigoths and the Vandals to the fall of the Roman Empire? Should we even be talking in terms of blame and decline at all?St Augustine wrote about the fall of the Roman Empire in the fifth century AD, Edward Gibbon famously tackled it in the eighteenth and it is a question that preoccupies us today.With Charlotte Roueché, historian of late antiquity at Kings College London; David Womersley, Fellow and Tutor at Jesus College, Oxford and editor of Edward Gibbon’s The History of the Decline and Fall of the Roman Empire; Richard Alston, Lecturer in Classics at Royal Holloway, University of London.

The Philosophy of Love