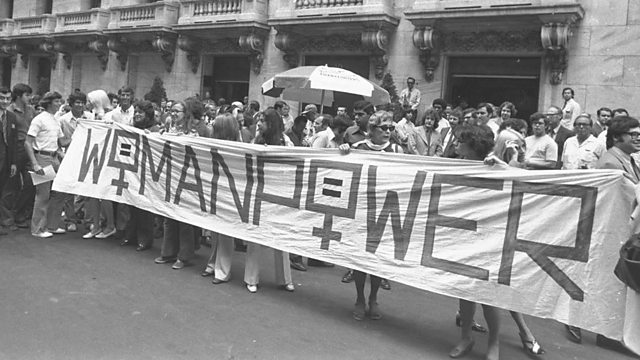 Melvyn Bragg discusses the rise of Feminism and the subsequent empowerment of women. What have been the most lasting changes for women in the last century and what is there still left to achieve?

Melvyn Bragg and guests discuss one of the most important events of the 20th century - the rise of Feminism and the subsequent empowerment of women. What have been the most important and lasting changes for women in the last 100 years and what is there still left to achieve? Are the biological differences between men and women insuperable? Is the feminist movement therefore set on a course it is inevitably bound to lose? Is the ideology of feminism in other words, working against our natural inclinations?If a man were to say “men are by nature more competitive, ambitious, status-conscious, dedicated, single-minded and persevering than women” then you could be forgiven for calling him anti-diluvian, blinkered and worse. But this is the express view of Dr Helena Cronin from the London School of Economics - a philosopher who has concentrated on Darwinian theory which she claims has never seriously been applied to humans. Joining her is Dr Germaine Greer whose book The Female Eunuch is credited with changing the lives of a generation of women. With Dr Helena Cronin, Co-director of the Centre for the Philosophy of the Natural and Social Sciences, London School of Economics; Dr Germaine Greer, Professor of English and Comparative Studies, Warwick University.