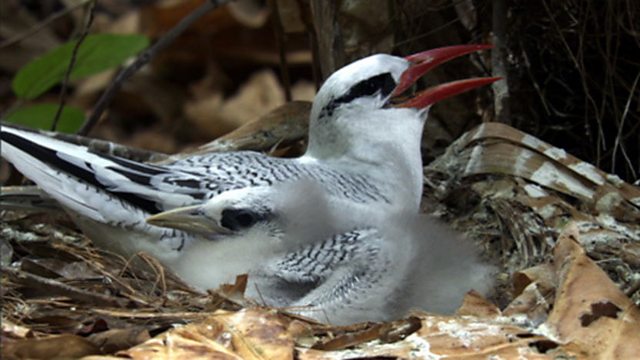 While one parent tends the chick, the other has to fly far offshore to hunt for fish and squid. Finding the prey isn't the problem for the red-billed tropicbirds of Little Tobago, however. Of more concern is how they get the food back to their hungry chicks when they have to run the gauntlet of waiting magnificent frigatebirds on their way back to the cliffs. The frigates aren't out to kill the tropicbirds, they're just trying to steal an easy meal by wresting the catch off the smaller birds. Aerial dogfights ensue with a favourite attack from behind. The tropicbirds' narrow wings allow them to turn more quickly, and if they stay near to the waves they have a chance of escaping the clutches of the much larger frigate birds. The lack of oil in the frigate birds' feathers means they can't risk ditching into the water. Back on shore, the chicks hungrily await their parent's return, but will there be anything left to give it? 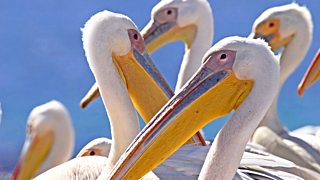 See all clips from Birds (7)