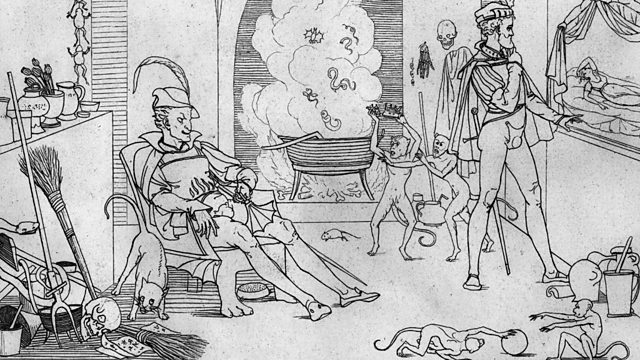 Melvyn Bragg discusses the myth of Faustus and the dangers of liaising with the forces of evil in pursuit of power, youth and supreme knowledge.

Melvyn Bragg and guests discuss the myth of Faustus." Was this the face that launch'd a thousand ships,And burnt the topless towers of Ilium?Sweet Helen, make me immortal with a kiss!Her lips suck forth my soul: see, where it flies!"So spoke Dr Faustus with unnerving prescience shortly before being dragged off to hell in Christopher Marlowe's historical tragedy. His Faustian pact with the devil Mephistopheles had granted him 24 years of limitless knowledge and power, but at the cost of his soul. His terrible story was told as a dire warning to anyone who would seek to reach beyond the limits of their human lot.Why is Goethe's Faust reprieved, when Marlowe's Faustus gets taken by Satan and what does the story's constant retelling tell us about society's changing attitudes to knowledge, ambition and hellish damnation? But who was the real Faust? Why has his story maintained a 400 year grip on the German and British imaginations, and how has his image changed as each generation embraced the myth?With Juliette Wood, Associate Lecturer in the Department of Welsh at the University College of Wales in Cardiff and Secretary of the Folklore Society; Osman Durrani, Professor of German at the University of Kent at Canterbury; Rosemary Ashton, Quain Professor of English Language and Literature at University College London.

The Second Law of Thermodynamics