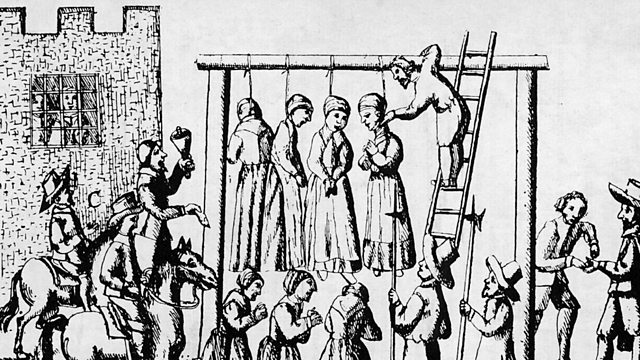 Melvyn Bragg discusses witchcraft in Reformation Europe; misogynism or a sustained attempt by the Christian Church to root out the last of an ancient religion of Europe?

Melvyn Bragg and guests discuss witchcraft in Reformation Europe. In 1486 a book was published in Latin, it was called Maleus Mallificarum and it very soon outsold every publication in Europe bar the Bible. It was written by Heinrich Kramer, a Dominican Priest and a witchfinder. "Magicians, who are commonly called witches" he wrote, "are thus termed on account of the magnitude of their evil deeds. These are they who by the permission of God disturb the elements, who drive to distraction the minds of men, such as have lost their trust in God, and by the terrible power of their evil spells, without any actual draught or poison, kill human beings.""Thou shalt not suffer a witch to live" says Exodus, and in the period of the Reformation and after, over a hundred thousand men and women in Europe met their deaths after being convicted of witchcraft.Why did practices that had been tolerated for centuries suddenly become such a threat? What brought the prosecutions of witchcraft to an end, and was there anything ever in Europe that could be truly termed as a witch?With Alison Rowlands, Senior Lecturer in European History at the University of Essex; Lyndal Roper, Fellow and Tutor in History at Balliol College, University of Oxford; Malcolm Gaskill, Fellow and Director of Studies in History at Churchill College, Cambridge.