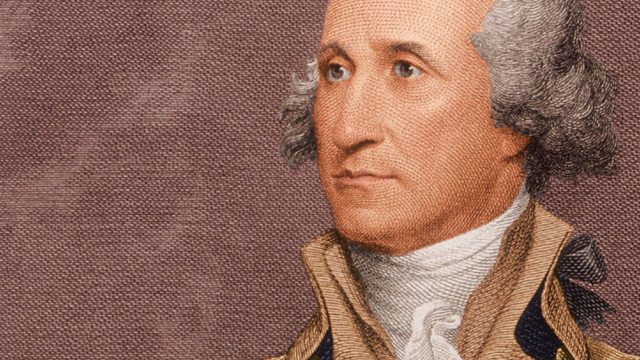 Washington and the American Revolution

Melvyn Bragg discusses the first President of the United States, George Washington, and the people and ideas that saw the American Revolution overthrow British rule in 1775.

Melvyn Bragg and guests discuss the first President of the US, George Washington, and the people and ideas that caused the American Revolution. In 1774 a tobacco farmer from Virginia with nice manners and a quiet lifestyle was moved to put himself forward as the military leader of the most massive rebellion the British Empire had ever suffered. George Washington had been a stout upholder of the status quo, regularly lending money to his ne’r-do-well neighbour simply to keep him in the plantation to which he had become accustomed. He even wrote a book on how to behave properly in polite society.What drove mild mannered George Washington to revolution? Washington may have been a moral man, but by anyone’s account he was no scholar, so who provided the intellectual inspiration behind that grandest of Enlightenment documents, the American Constitution. With Carol Berkin, Professor of History at The City University of New York; Simon Middleton, Lecturer in American History at the University of East Anglia; and Colin Bonwick, Professor Emeritus in American History at Keele University.