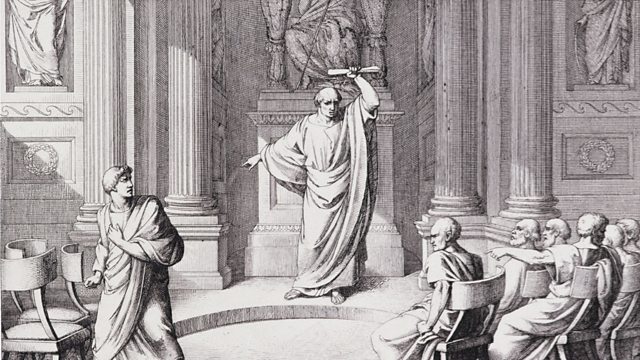 Melvyn Bragg discusses the rise and eventual downfall of the Roman Republic which survived for 500 years.

Melvyn Bragg and guests discuss the rise and eventual downfall of the Roman Republic which survived for 500 years.Around 550 BC, Lucretia, the daughter of an aristocrat, was raped by the son of Tarquin, the King of Rome. Lucretia told her family what had happened to her and then in front of them, killed herself from shame. The Roman historian Livy describes what was believed to have happened next:"Brutus, while the others were absorbed in grief; drew out the knife from Lucretia's wound, and holding it up, dripping with gore, exclaimed, "By this blood, most chaste until a prince wronged it, I swear, and I take you, gods, to witness, that I will pursue Lucius Tarquinius Superbus and his wicked wife and all his children, with sword, with fire, aye with whatsoever violence I may; and that I will suffer neither them nor any other to be king in Rome!". The King was duly expelled from the city and the Roman Republic was founded and lasted for 500 years. But in what form did this republic evolve, what were its values and ideals and what ultimately caused the end of the world’s first true experiment in constitutional government?With Greg Woolf, Professor of Ancient History at St Andrews University; Catherine Steel, Lecturer in Classics at the University of Glasgow; Tom Holland, historian and author of Rubicon: the Triumph and Tragedy of the Roman Republic.