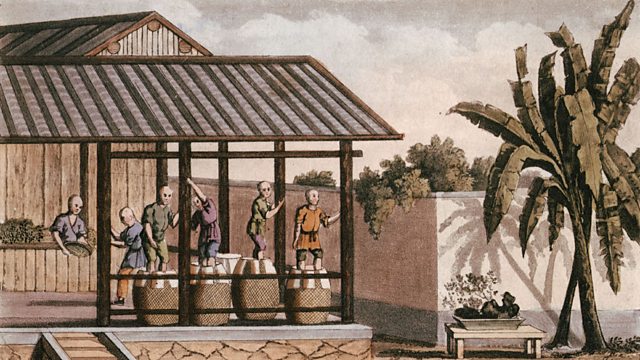 Melvyn Bragg discusses tea, the first truly global commodity which helped define class and gender, and perhaps more than any other substance has created the culture of modern Britain.

Melvyn Bragg and guests discuss tea, the first truly global commodity. After air and water, tea is the most widely consumed substance on the planet and the British national drink. In this country it helped define class and gender, it funded wars and propped up the economy of the Empire. The trade started in the 1660s with an official import of just 2 ounces, by 1801 24 million pounds of tea were coming in every year and people of all classes were drinking an average two cups a day. It was the first mass commodity, and the merchant philanthropist Jonas Hanway decried its hold on the nation, “your servants' servants, down to the very beggars, will not be satisfied unless they consume the produce of the remote country of China”.What drove the extraordinary take up of tea in this country? What role did it play in the global economy of the Empire and at what point did it stop becoming an exotic foreign luxury and start to define the essence of Englishness?With Huw Bowen, Senior Lecturer in Economic and Social History at the University of Leicester; James Walvin, Professor of History at the University of York; Amanda Vickery, Reader in History at Royal Holloway, University of London.