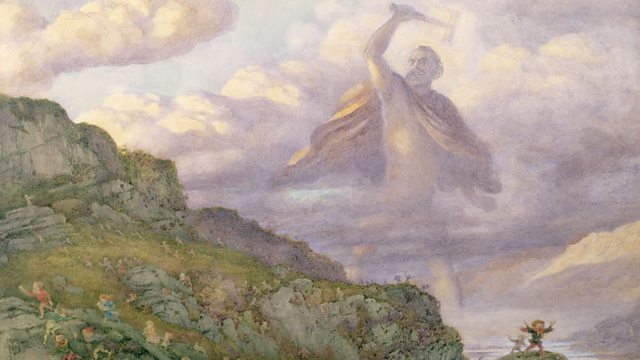 Melvyn Bragg discusses the theology that inspired the Vikings and the role that myths and religion played in their daily lives.

Melvyn Bragg and guests discuss the Vikings’ myths. Thor’s huge hammer, the wailing Valkyrie, howling wolves and fierce elemental giants give a rowdy impression of the Norse myths. But at the centre of their cosmos stands a gnarled old Ash tree, from which all distances are measured and under which Valhalla lies. In the first poem of The Poetic Edda, where the stories of the Norse Gods are laid down in verse, the Seeress describes it in her prophesy: “I know that an ash-tree stands called Yggdrasil,a high tree soaked with shining loamfrom there come the dews which fall in the valley, ever green, it stands over the well of fate.” It is from this tree that the father of the Gods, Odin, will ultimately hang himself: an image of divine sacrifice so problematic for thirteenth century Christians that they left it out when they wrote the myths down.What was the theology that inspired the Vikings and what role did their myths and religion play in their daily lives?With Carolyne Larrington, Tutor in Medieval English at St John’s College, Oxford; Heather O’Donoghue, Vigfusson Rausing Reader in Ancient Icelandic Literature in the Department of English at Oxford University; John Hines, Professor of Archaeology at Cardiff University.