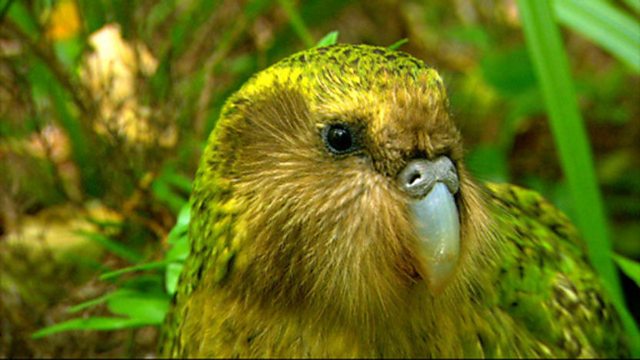 It shouldn't happen to a wildlife presenter... In Last Chance to See, Mark Carwardine and and Stephen are delighted to find a male kakapo called Sirocco, but not nearly as delighted as Sirocco is to see them. Stephen can barely contain himself when Sirocco decides that Mark is his ideal companion... and tries to mate with Mark's hairdo.

For zoologist Mark Carwardine, the chance to photograph the rare kakapo is too good an opportunity to miss. The lovelorn Sirocco is the obvious candidate. He's keen on bonding with humans, so usually easy to find. Also, like all the parrots, he's fitted with a radio-tracking device which helps the scientists find and study the parrots more easily. All they have to do is tune in and follow the signal. Jo, the scientist, spots him up the tree, but Mark has difficulty seeing him in the foliage. However, Sirocco sees Mark and starts climbing down the tree using his beak (in the absence of the prehensile tails that help other arboreal creatures climb). Douglas Adams said that kakapos have not only forgotten how to fly, they've forgotten that they've forgotten, so often they jump out of a tree expecting to fly and freefall like a brick. Although the wings are no good for flight, they do work to controll the freefall. Sirocco poses for the camera and Stephen describes him as looking old fashioned, with his big sideburns and Victorian gentleman's face. He's well camouflaged in the forest undergrowth. Stephen comments that he's a typical male, as Sirocco is clearly only interested in one thing. He jumps on to Mark's head and attempts to mate with him! 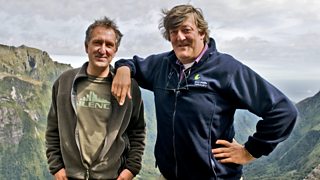 See all clips from Kakapo (5)

See all clips from Last Chance to See (33)