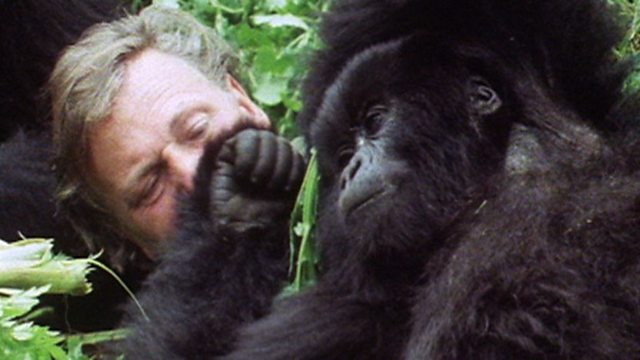 Sir David delivers a word perfect ad lib as he finds himself in an unplanned close encounter with this group of mountain gorillas, some of the rarest great apes.

This has to be one of the most memorable and wonderful Attenborough sequences and has been voted as one of the top TV moments of all time. It shows Sir David delivering a word perfect ad lib as he finds himself in an unplanned close encounter with this group of mountain gorillas. At the end of the clip, with one young gorilla lying across his body, just at the edge of the picture you can see the baby gorillas who were busy removing the presenter's shoes.

In the volcanic forests on the border of Rwanda and Zaire, 10,000 feet above sea level, lives the largest of the great apes, the gorilla. Studied by many scientists over the years, the gorillas have become used to a human presence and so allowed David Attenborough this encounter.

Gorillas have a sense of smell and sight so similar to humans that we see the world in the same way that they do. They live in social groups and have relationships so similar to our own that is it impossible not to see the similarites

The silverback male is the leader of the group of adult females and their young. The gorillas spend most of their days feeding, grooming, playing and relaxing in the forests of the volcano.

Without the need to use their hands for walking, gorillas have developed sensitive pads on their fingers to enhance their sense of touch; this enables a gorilla to investigate small items and be more delicate.

They even have unique fingerprints the same as a human. With no enemies in the forest, the silverback needs fear nothing except man armed with a spear or a gun, and in recent times, it is the destruction of habitat and poaching which has placed these creatures in the most danger.

David Attenborough sits in the midst of the group as he tells us all about the gorillas, talking in a half whisper and commenting on how unfair it is that man has chosen the gorilla as a symbol of all that is violent and fearsome, when they are so peaceable, unlike ourselves. 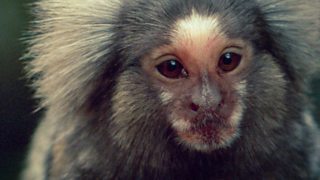 Life on Earth—Life in the Trees

More clips from Life in the Trees

See all clips from Life in the Trees (4)

More clips from Life on Earth

See all clips from Life on Earth (31)