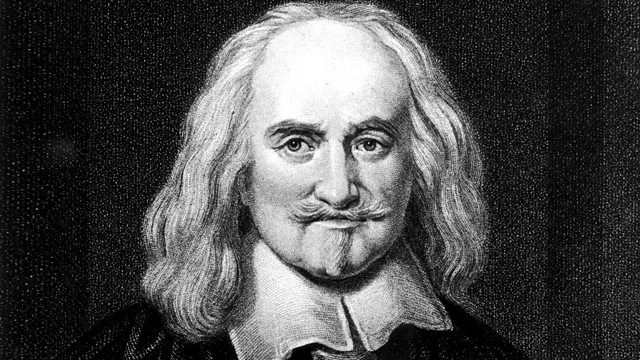 Melvyn Bragg and guests discuss the great 17th century political philosopher Thomas Hobbes who argued: "During the time men live without a common power to keep them all in awe, they are in that condition which is called war; and such a war as is of every man against every man". For Hobbes, the difference between order and disorder was stark. In the state of nature, ungoverned man lived life in "continual fear, and danger of violent death". The only way out of this "solitary, poor, nasty, brutish, and short" existence, he said, was to relinquish all your freedom and submit yourself to one all powerful absolute sovereign. Hobbes' proposal, contained in his controversial and now classic text, Leviathan, was written just as England was readjusting to life after the Civil War and the rule of Oliver Cromwell. In fact, in his long life Hobbes’ allegiance switched from Charles I to Cromwell and back to Charles II. But how did the son of a poor clergyman end up as the most radical thinker of his day? Why did so many of Hobbes' ideas run counter to the prevailing fondness for constitutionalism with a limited monarchy? And why is he regarded by so many political philosophers as an important theorist when so few find his ideas convincing? With Quentin Skinner, Regius Professor of History at the University of Cambridge; David Wootton, Professor of History at the University of York; Annabel Brett, Senior Lecturer in Political Thought and Intellectual History at Cambridge University.