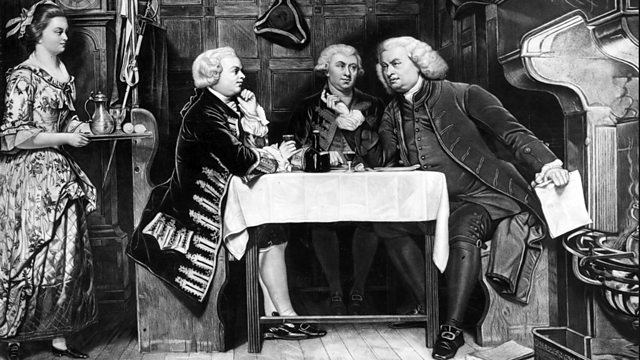 Melvyn Bragg discusses Samuel Johnson, a giant of 18th century literature, language and letters, and perhaps the most quotable Englishman to have ever lifted a pen.

Melvyn Bragg and guests discuss Samuel Johnson, a giant of 18th century literature. “There is no arguing with Johnson, for when his pistol misses fire, he knocks you down with the butt of it." The poet Oliver Goldsmith was not alone in falling victim to the bludgeoning wit of Samuel Johnson. The greatest luminaries of 18th century England, including the painter Joshua Reynolds, the philosopher Edmund Burke and the politician Charles James Fox, all deferred to him... happily or otherwise. Samuel Johnson was credited with defining English literature with his Lives of the Poets and his edition of Shakespeare, and of defining English language with his Dictionary. Yet despite those lofty acclamations he failed to get a degree, claimed he had never finished a book, was an inveterate hack who told his friend James Boswell, "No man but a blockhead ever wrote, except for money". How did an Oxford drop-out become England's most famous and well connected man of letters? How did generations of readers come to see him as the father of English Literature? And why is he so little read today? With John Mullan, Professor of English at University College London; Jim McLaverty, Professor of English at Keele University; Judith Hawley, Senior Lecturer in English at Royal Holloway, University of London.