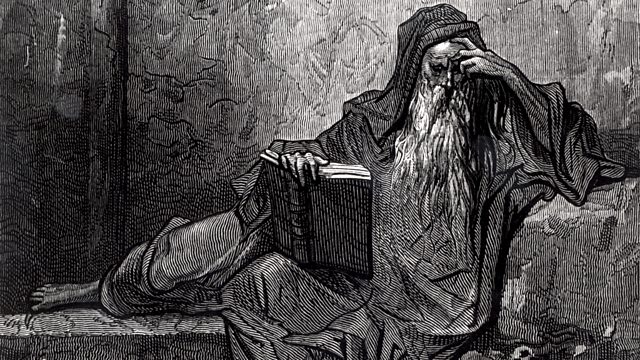 Melvyn Bragg discusses Merlin, prophet, magician, king maker and the original mad man of the woods, distraught at the death of his lord in battle.

Melvyn Bragg and guests discuss the legendary wizard Merlin. He was sired by an incubus and born of a virgin; he was a prophet, a shape-shifter, a king-maker and a mad man of the woods. Before Gandalf there was Merlin: the power behind Arthur and a literary sensation for centuries. In a literary career spanning 1500 years, Merlin, or originally Myrddin, put the sword in the stone, built Stonehenge, knew the truth behind the Holy Grail and discovered the Elixir of Life. "Beware Merlin for he knows all things by the devil's craft" say the poisoners in Malory's Morte D'Arthur; but he is also on the side of the good and is almost Christ-like in some of the versions of his tale, and his prophesies were pored over by the medieval Church. Who was Merlinus Ambrosius, as he is sometimes known? Where does his legend spring from and how has it been appropriated and adapted over time?With Juliette Wood, Associate Lecturer in the Department of Welsh at Cardiff University, Stephen Knight, Distinguished Research Professor in English Literature at Cardiff University, Peter Forshaw, Lecturer in Renaissance Philosophies at Birkbeck, University of London.