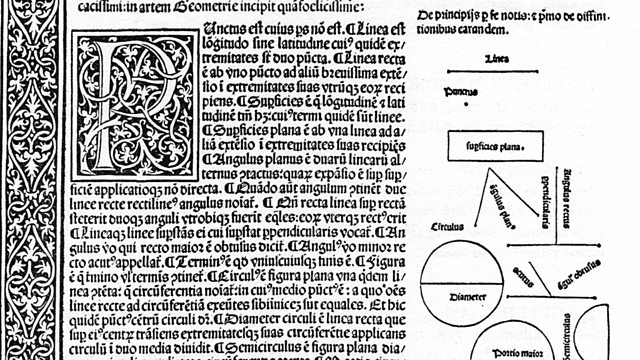 Melvyn Bragg discusses Renaissance Mathematics and the change in the understanding of numbers, movement, time and even nature itself, culminating in the calculus of Isaac Newton and Gottfried Leibniz.

Melvyn Bragg and guests discuss Renaissance Mathematics. As with so many areas of European thought, mathematics in the Renaissance was a question of recovering and, if you were very lucky, improving upon Greek ideas. The geometry of Euclid, Appollonius and Ptolemy ruled the day. Yet within two hundred years, European mathematics went from being an art that would unmask the eternal shapes of geometry to a science that could track the manifold movements and changes of the real world. The Arabic tradition of Algebra was also assimilated. In its course it changed the way people understood numbers, movement, time, even nature itself and culminated in the calculus of Isaac Newton and Gottfried Leibniz. But how did this profound change come about? What were the ideas that drove it and is this the period in which mathematics became truly modern?With Robert Kaplan, co-founder of the Maths Circle at Harvard University; Jim Bennett, Director of the Museum of Science and Fellow of Linacre College, University of Oxford; Jackie Stedall, Research Fellow in the History of Mathematics, The Queen's College, Oxford.

The French Revolution's reign of terror