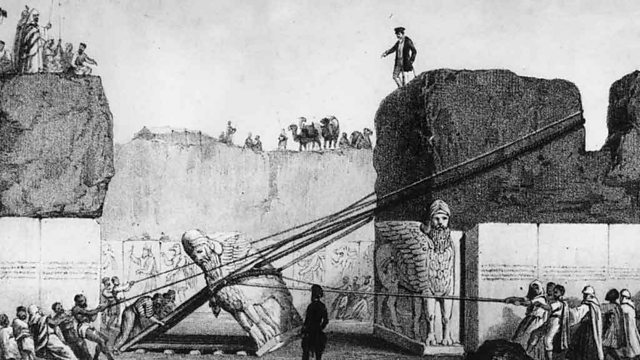 Melvyn Bragg discusses the link between archaeology and imperialism, and why there was such a fascination with Egypt, Greece and Mesopotamia in the 18th and 19th centuries.

Melvyn Bragg and guests discuss the link between archaeology and imperialism. In 1842 a young English adventurer called Austen Henry Layard set out to excavate what he hoped were the remains of the biblical city of Nineveh in Mesopotamia. On arrival he discovered that the local French consul, Paul Emile Botta, was already hard at work. Across the Middle East and in Egypt, archaeologists, antiquarians and adventurers were exploring cities older than the Bible and shipping spectacular monuments down the Nile and the Tigris to burgeoning European museums.What was it about the ancient cultures of Egypt and Mesopotamia that so gripped the 19th century imagination? How did nationalism and imperialism affect the search for the ancient past and how did archaeology evolve from its adventuresome, even reckless, origins into the science of artefacts we know today?With Tim Champion, Professor of Archaeology, University of Southampton; Richard Parkinson, Assistant Keeper in the Department of Ancient Egypt and Sudan at the British Museum; Eleanor Robson, Lecturer in the History and Philosophy of Science at Cambridge University and a Fellow of All Souls College, Oxford.

Alfred and the Battle of Edington