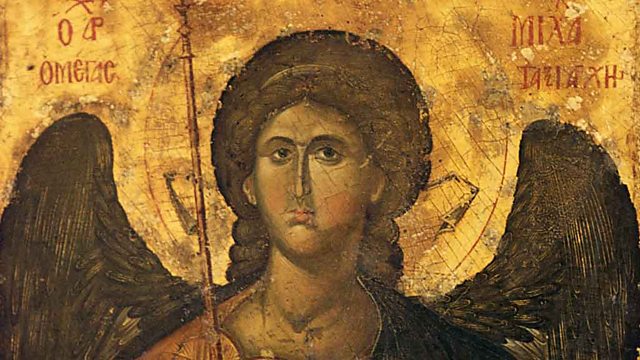 Melvyn Bragg discusses the heavenly host of Angels, so popular with so many believers and so problematic for philosophers and theologians.

Melvyn Bragg and guests discuss the heavenly host of Angels. George Bernard Shaw made the observation that "in heaven an angel is nobody in particular", but there is nothing commonplace about this description of angels from the Bible's book of Ezekiel:"They had the likeness of a man. And every one had four faces, and every one had four wings. And their feet were straight feet; and the sole of their feet was like the sole of a calf's foot: and they sparkled like the colour of burnished brass.... As for the likeness of their faces, they four had the face of a man, and the face of a lion, on the right side: and they four had the face of an ox on the left side; they four also had the face of an eagle." With angels like that, it is easy to see why they have caused so much controversy over the centuries.What part have angels played in western religion? How did they get their halos and their wings? And what are they really: Gods or men?With Martin Palmer, theologian and Director of the International Consultancy on Religion, Education and Culture; Valery Rees, Renaissance Scholar at the School of Economic Science; John Haldane, Professor of Philosophy, University of St Andrews.