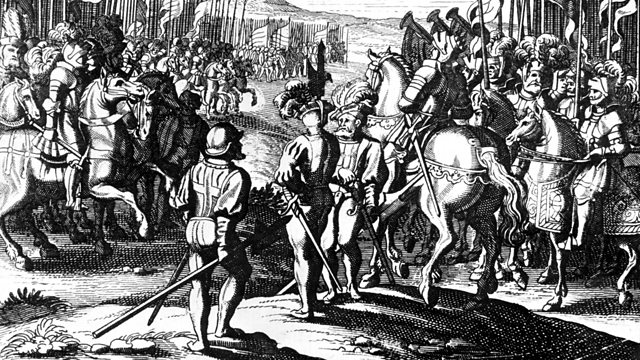 The Field of the Cloth of Gold

Melvyn Bragg discusses the Field of the Cloth of Gold in 1520, one of the greatest and most conspicuous displays of wealth and culture that Europe had ever seen.

Melvyn Bragg and guests discuss the Field of the Cloth of Gold, an extraordinary international party. In the spring of 1520 six thousand Englishmen and women packed their bags and followed their King across the sea to France. They weren't part of an invasion force but were attendants to King Henry VIII and travelling to take part in the greatest and most conspicuous display of wealth and culture that Europe had ever seen. They were met by Francis I of France and six thousand French noblemen and servants on English soil in Northern France and erected their temporary palaces, elaborate tents, jousting pavilions and golden fountains spewing forth red, white and claret wine in the Val D'Or. For just over two weeks they created a temporary town the size of Norwich, England's second city, on the 'Camp du Drap D'Or', or Field of the Cloth of Gold. What drove the French and the English to create such an extraordinary event? What did the two sides do when they got there, and what - if anything - was achieved? With Steven Gunn, Lecturer in Modern History at Oxford University; John Guy, Fellow of Clare College, University of Cambridge; Penny Roberts, Senior Lecturer in History at the University of Warwick.