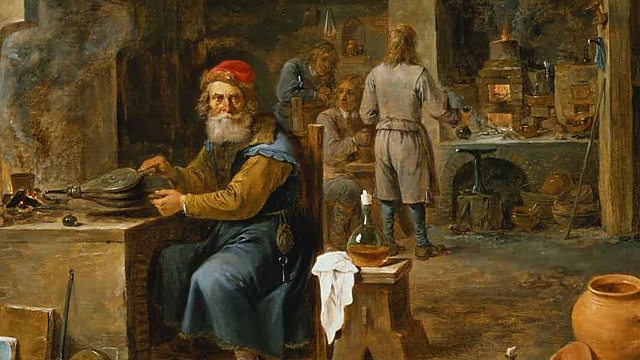 Melvyn Bragg discusses the pursuit of Alchemy, its history and legacy. What ideas could transform base metals into gold?

Melvyn Bragg and guests discuss the history of Alchemy, the ancient science of transformations. The most famous alchemical text is the Emerald Tablet, written around 500BC and attributed to the mythical Egyptian figure of Hermes Trismegistus. Among its twelve lines are the essential words - “as above, so below". They capture the essence of alchemy, that the heavens mirror the earth and that all things correspond to one another. Alchemy was taken up by some of the most extraordinary people in our intellectual development, including Roger Bacon, Paracelsus, the father of chemistry, Robert Boyle, and, most famously, Isaac Newton, who wrote more about alchemy than he did about physics. It is now contended that it was Newton’s studies into alchemy which gave him the fundamental insight into the famous three laws of motion and gravity.With Peter Forshaw, Lecturer in Renaissance Philosophies at Birkbeck, University of London, Lauren Kassell, Lecturer in the History and Philosophy of Science at the University of Cambridge, Stephen Pumfrey, Senior Lecturer in the History of Science at the University of Lancaster.