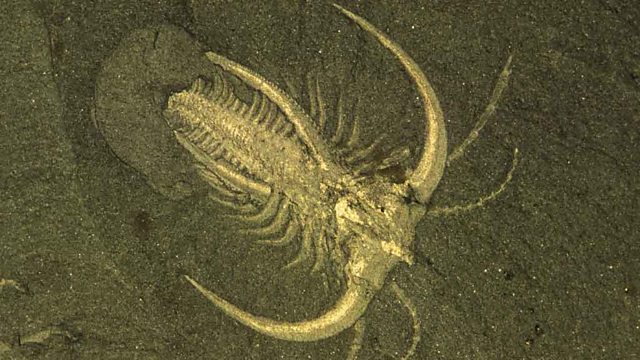 Melvyn Bragg discusses the Cambrian period, a time when evolution took a leap, and life on this planet suddenly went to being large, complex, numerous and dizzyingly diverse.

Melvyn Bragg and guests discuss the Cambrian period when there was an explosion of life on Earth. In the Selkirk Mountains of British Columbia in Canada, there is an outcrop of limestone shot through with a seam of fine dark shale. A sudden mudslide into shallow water some 550 million years ago means that a startling array of wonderful organisms has been preserved within it. Wide eyed creatures with tentacles below and spines on their backs, things like flattened rolls of carpet with a set of teeth at one end, squids with big lobster-like arms. There are thousands of them and they seem to testify to a time when evolution took a leap and life on this planet suddenly went from being small, simple and fairly rare to being large, complex, numerous and dizzyingly diverse. It happened in the Cambrian Period and it's known as the Cambrian Explosion.But if this is the great crucible of life on Earth, what could have caused it? How do the strange creatures relate to life as we see it now? And what does the Cambrian Explosion tell us about the nature of evolution?With Simon Conway Morris, Professor of Evolutionary Palaeobiology, Cambridge University; Richard Corfield, Visiting Senior Lecturer at the Centre for Earth, Planetary, Space and Astronomical Research, Open University; Jane Francis, Professor of Palaeoclimatology, University of Leeds.