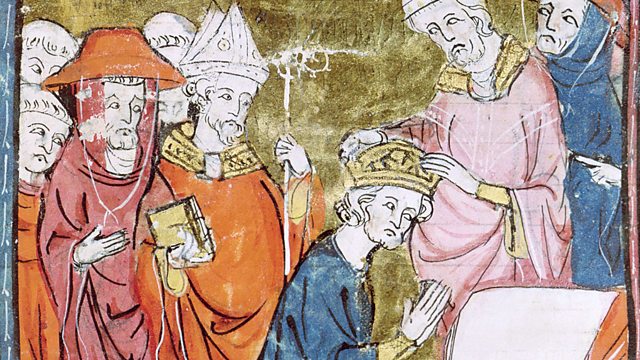 Melvyn Bragg discusses the Emperor Charlemagne, the first of the Holy Roman Emperors, and the Carolingian Renaissance.

Melvyn Bragg and guests discuss the Holy Roman Emperor Charlemagne and the Carolingian Renaissance. In 800 AD on Christmas Day in Rome, Pope Leo III proclaimed Charlemagne Emperor. According to the Frankish historian Einhard, Charlemagne would never have set foot in St Peter's that day if he had known that the Pope intended to crown him. But Charlemagne accepted his coronation with magnanimity. Regarded as the first of the Holy Roman Emperors, Charlemagne became a touchstone for legitimacy until the institution was brought to an end by Napoleon in 1806. A Frankish King who held more territory in Western Europe than any man since the Roman Emperor, Charlemagne's lands extended from the Atlantic to Vienna and from Northern Germany to Rome. His reign marked a period of enormous cultural and literary achievement. But at its foundation lay conquest, conversion at the point of a sword and a form of Christianity that was obsessed with sin, discipline and correction. How did Charlemagne become the most powerful man in Western Europe and how did he finance his conquests? Why was he able to draw Europe's most impressive scholars to his court? How successful was he in his quest to reform his church and educate the clergy? And can the Carolingian period really be called a Renaissance? With Matthew Innes, Professor of History at Birkbeck, University of London; Julia Smith, Edwards Professor of Medieval History at Glasgow University; Mary Garrison, Lecturer in History at the University of York