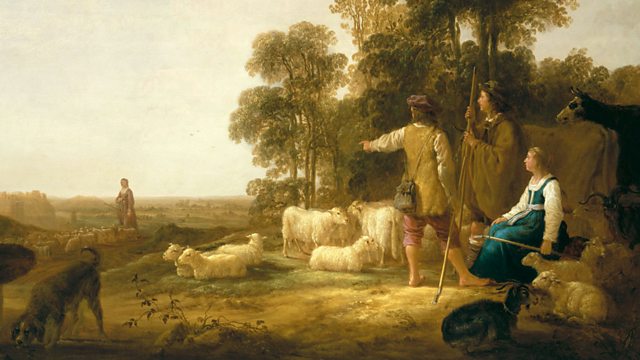 Melvyn Bragg and guests discuss pastoral literature which looks at tensions between nature and art, the real and the ideal, the actual and the mythical.

Melvyn Bragg and guests discuss pastoral literature.Come live with me and be my love, And we will all the pleasures prove That valleys, groves, hills, and fields, Woods or steepy mountain yields.And we will sit upon the rocks, Seeing the shepherds feed their flocks, By shallow rivers to whose falls Melodious birds sing madrigals. An entreaty from Christopher Marlowe's Passionate Shepherd to His Love - thought by many to be the crowning example of Elizabethan pastoral poetry. The traditions of pastoral poetry, literature and drama can be traced back to the third century BC and have principally offered a conventionalised picture of rural life, the naturalness and innocence of which is seen to contrast favourably with the corruption and artificialities of city and court life. Pastoral literature deals with tensions between nature and art, the real and the ideal, the actual and the mythical, and although pastoral works have been written from the point of view of shepherds or rustics, they have often been penned by highly sophisticated, urban poets and playwrights. But to what extent does pastoral literature represent a continuous yearning for a non-existent Golden Age of Innocence? How far did it evolve to reflect the social and political preoccupations of its times and what were the real meanings of its much used metaphors of town and country? With Helen Cooper, Professor of Medieval and Renaissance English at the University of Cambridge; Laurence Lerner, former Professor of English at the University of Sussex; Julie Sanders, Professor of English Literature and Drama at the University of Nottingham.