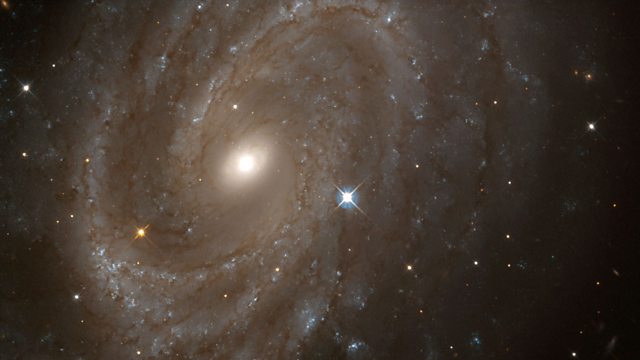 Melvyn Bragg and guests discuss the galaxies; spread out across the void of space like spun sugar, but harbouring in their centres super-massive black holes.

Melvyn Bragg and guests discuss the galaxies. Spread out across the voids of space like spun sugar, but harbouring in their centres super-massive black holes. Our galaxy is about 100,000 light years across, is shaped like a fried egg and we travel inside it at approximately 220 kilometres per second. The nearest one to us is much smaller and is nicknamed the Sagittarius Dwarf. But the one down the road, called Andromeda, is just as large as ours and, in 10 billion years, we'll probably crash into it. Galaxies - the vast islands in space of staggering beauty and even more staggering dimension. But galaxies are not simply there to adorn the universe; they house much of its visible matter and maintain the stars in a constant cycle of creation and destruction. But why do galaxies exist, how have they evolved and what lies at the centre of a galaxy to make the stars dance round it at such colossal speeds? With John Gribbin, Visiting Fellow in Astronomy at the University of Sussex; Carolin Crawford, Royal Society University Research Fellow at the Institute of Astronomy at Cambridge; Robert Kennicutt, Plumian Professor of Astronomy and Experimental Philosophy at the University of Cambridge.