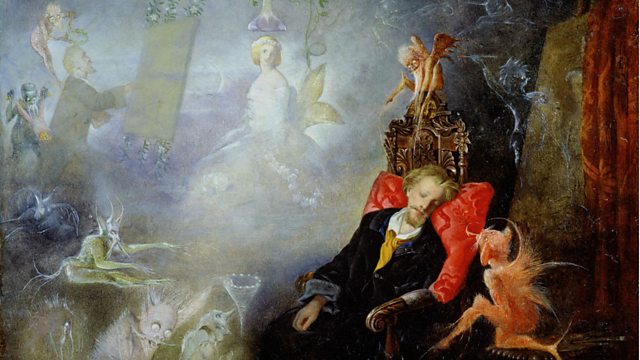 Melvyn Bragg discusses the literary and visual depiction of fairies. Supernatural creatures inhabiting a half-way world between this one and the next, fairies are ubiquitous in human culture.

Melvyn Bragg and guests discuss the literary and visual depiction of fairies, supernatural creatures that inhabit a half-way world between this one and the next.'They stole little Bridget for seven years long; When she came down again her friends were all gone. They took her lightly back, between the night and morrow; They thought that she was fast asleep, but she was dead with sorrow. They have kept her ever since deep within the lake, On a bed of flag-leaves, watching till she wake.' When the 19th century Anglo-Irish poet Richard Allingham wrote his poem The Fairies, he was replicating a belief about supernatural figures who steal children that stretched back to ancient Persian myths that date from 3000 BC. So universal is the terror of losing a child that the images of a lonely lost child and a mother who loses her child to fairies exist in civilisations everywhere. Demon Figures and Fairies have undergone a series of transformations according to their historical context, but what remains constant is their supernatural power and their association with the very human concerns of marriage, death and loss. In what way have fairies changed in guise and purpose throughout history? How did ancient fairy lore sit with the Christianity of the Middle Ages? How were fairies appropriated for the purpose of the 16th century witchcraft trials and why did fairies obsess so many Victorian artists and writers? And why is it that stories about fairies exist all over the world and what is our fascination with them?With Juliette Wood, Associate Lecturer in the Department of Welsh at Cardiff University and Secretary of the Folklore Society; Diane Purkiss, Fellow and Tutor of English at Keble College, Oxford; Nicola Bown, Lecturer in Victorian Studies at Birkbeck, University of London.