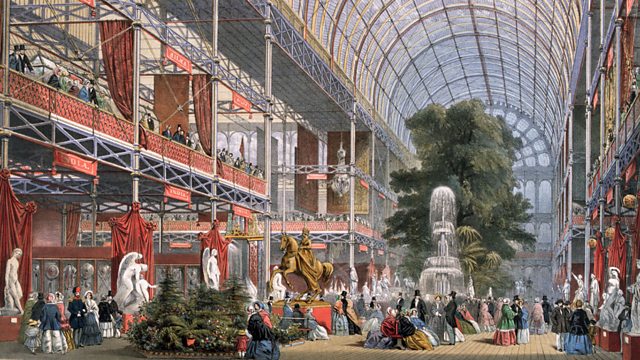 The Great Exhibition of 1851

Melvyn Bragg and guests discuss the 1851 Great Exhibition. “Its grandeur does not consist in one thing, but in the unique assemblage of all things. Whatever human industry has created you find there. It seems as if only magic could have gathered this mass of wealth from all the ends of the earth.” So wrote Charlotte Bronte in 1851 after visiting the Great Exhibition set in the vast Crystal Palace in London's Hyde Park. By the time the exhibition closed, one quarter of the entire British population had visited Crystal Palace, the first pre-fabricated building of its kind, to marvel at an extraordinary array of exhibits there. Amongst them were the biggest diamond in the world, a carriage drawn by kites, furniture made of coal, and a set of artificial teeth fitted with a swivel devise which allowed the user to yawn without displacing them. The Great Exhibition was huge in terms of the development of British manufacturing, the burgeoning of a global consumer market, the development of museums and the international standing of Britain culturally and technologically. It was also a triumph for Prince Albert and it turned a tidy profit. How did the Exhibition crystallise a particular moment in early Victorian Britain? In what way did it capitalise on the dawn of mass travel and greater levels of international co-operation? How did fears of revolutionary Europe define the policing and organisation of the event? And how far, if at all, did the Great Exhibition go in blurring class distinctions? With Jeremy Black, Professor of History at the University of Exeter; Hermione Hobhouse, Architectural Historian and Writer; Clive Emsley, Professor of History at the Open University.