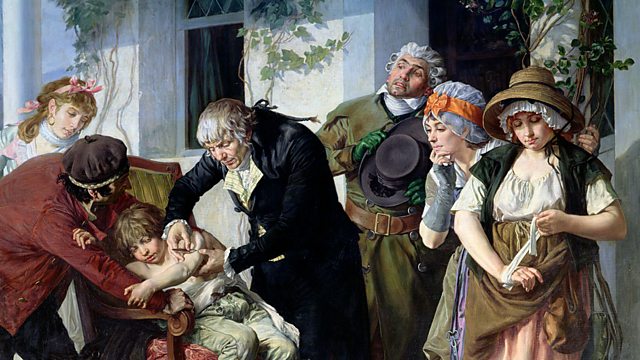 Melvyn Bragg discusses immunisation and Edward Jenner’s risky experiment that led to a breakthrough in medical science - he called it vaccination.

Melvyn Bragg and guests discuss the search for immunisation. In 1717, Lady Mary Wortley Montagu, the wife of the British Ambassador to the Ottoman Empire, wrote a letter to her friend describing how she had witnessed the practice of smallpox inoculation in Constantinople. This involved the transfer of material from a smallpox postule into multiple cuts made in a vein. Lady Montagu had lost her brother to smallpox and was amazed that the Middle Eastern practice of inoculation rendered the fatal disease harmless. In Britain, the practice was unknown. Inoculation was an early attempt at creating immunity to disease, but was later dismissed when Edward Jenner pioneered immunisation through vaccination in 1796. Vaccination was hailed a huge success. Napoleon described it as the greatest gift to mankind, but when the British government introduced the compulsory Vaccination Act in 1853, targeted at the poor and the working class, it sparked a mass opposition movement.How did a Gloucestershire country surgeon become known as the father of vaccination? Why did the British government introduce compulsory smallpox vaccination in 1853? What were the consequences of those who opposed it? And how was the disease finally eradicated? With Nadja Durbach, Associate Professor of History at the University of Utah, Chris Dye, Co-ordinator of the World Health Organisation's work on tuberculosis epidemiology, Sanjoy Bhattacharya, Lecturer in the Wellcome Trust Centre for the History of Medicine at UCL

The Great Exhibition of 1851