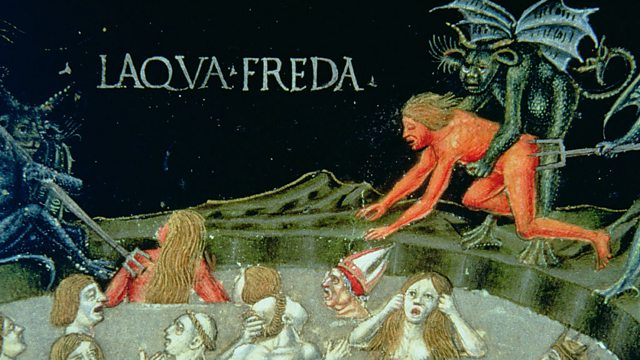 Melvyn Bragg discusses the idea of Hell and its changing appearance in literature and the visual arts from Ancient Egypt to today.

Melvyn Bragg and guests discuss hell and its representation in literature and the visual arts, through the ages from Ancient Egypt to modern Christianity. Why do certain religions have a Satan figure and others don’t? And why did hell shift from the underworld to here on earth in 20th Century representations?A fiery vault beneath the earth or as Sartre put it, other people - it seems our ideas of hell are inevitably shaped by religious and cultural forces. For Homer and Virgil it’s a place you can visit and return from, often a wiser person for it. With Christianity it’s a one way journey and a just punishment for a sinful, unrepentant life. Writers and painters like Dante and Hieronymus Bosch gave free rein to their imaginations, depicting a complex hierarchical world filled with the writhing bodies of tormented sinners. In the 20th century hell can be found on earth in portrayals of war and the Holocaust but also in the mind, particularly in the works of TS Eliot and Primo Levi. So what is the purpose of hell and why is it found mainly in religions concerned with salvation? Why has hell proved so inspirational for artists through the ages, perhaps more so than heaven? And why do some ideas of hell require a Satan figure while others don't?With Martin Palmer, Director of the International Consultancy on Religion, Education and Culture; Margaret Kean, Tutor and Fellow in English at St Hilda’s College, Oxford; Neil MacGregor, Director of the British Museum.