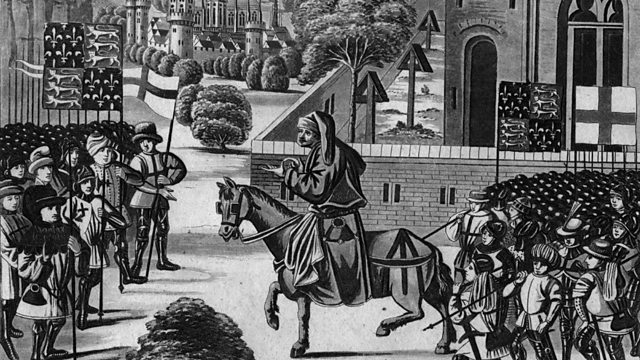 Melvyn Bragg and guests discuss the Peasants’ Revolt of 1381 - “When Adam delved and Eve span, who was then the Gentleman?"

Melvyn Bragg and guests discuss the Peasants’ Revolt of 1381. “When Adam delved and Eve span, who was then the Gentleman?" these are the opening words of a rousing sermon, said to be by John Ball, which fires a broadside at the deeply hierarchical nature of fourteenth century England. Ball, along with Wat Tyler, was one of the principal leaders of the Peasants’ Revolt – his sermon ends: "I exhort you to consider that now the time is come, appointed to us by God, in which ye may (if ye will) cast off the yoke of bondage, and recover liberty". The subsequent events of June 1381 represent a pivotal and thrilling moment in England’s history, characterised by murder and mayhem, beheadings and betrayal, a boy-King and his absent uncle, and a general riot of destruction and death. By most interpretations, the course of this sensational story threatened to undermine the very fabric of government as an awareness of deep injustice was awakened in the general populace.But who were the rebels and how close did they really come to upending the status quo? And just how exaggerated are claims that the Peasants’ Revolt laid the foundations of the long-standing English tradition of radical egalitarianism? With Miri Rubin, Professor of Early Modern History at Queen Mary, University of London; Caroline Barron, Professorial Research Fellow at Royal Holloway, University of London; Alastair Dunn, author of The Peasants’ Revolt - England’s Failed Revolution of 1381.