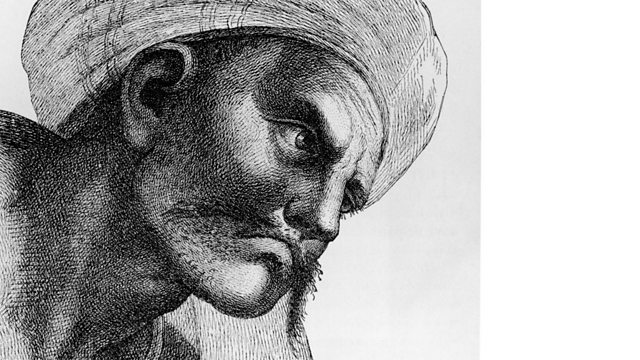 Melvyn Bragg discusses the philosopher Averroes who worked to reconcile the theology of Islam with the rationality of Aristotle, achieving both fame and infamy.

Melvyn Bragg and guests discuss the philosopher Averroes who worked to reconcile the theology of Islam with the rationality of Aristotle achieving fame and infamy in equal measure In The Divine Comedy Dante subjected all the sinners in Christendom to a series of grisly punishments, from being buried alive to being frozen in ice. The deeper you go the more brutal and bizarre the punishments get, but the uppermost level of Hell is populated not with the mildest of Christian sinners, but with non-Christian writers and philosophers. It was the highest compliment Dante could pay to pagan thinkers in a Christian cosmos and in Canto Four he names them all. Aristotle is there with Socrates and Plato, Galen, Zeno and Seneca, but Dante ends the list with neither a Greek nor a Roman but 'with him who made that commentary vast, Averroes'. Averroes was a 12th century Islamic scholar who devoted his life to defending philosophy against the precepts of faith. He was feted by Caliphs but also had his books burnt and suffered exile. Averroes is an intellectual titan, both in his own right and as a transmitter of ideas between ancient Greece and Modern Europe. His commentary on Aristotle was so influential that St Thomas Aquinas referred to him with profound respect as 'The Commentator'. But why did an Islamic philosopher achieve such esteem in the mind of a Christian Saint, how did Averroes seek to reconcile Greek philosophy with Islamic theology and can he really be said to have sown the seeds of the Renaissance in Europe? With Amira Bennison, Senior Lecturer in Middle Eastern and Islamic Studies at the University of Cambridge; Peter Adamson, Reader in Philosophy at King's College London; Sir Anthony Kenny, philosopher and former Master of Balliol College, Oxford.