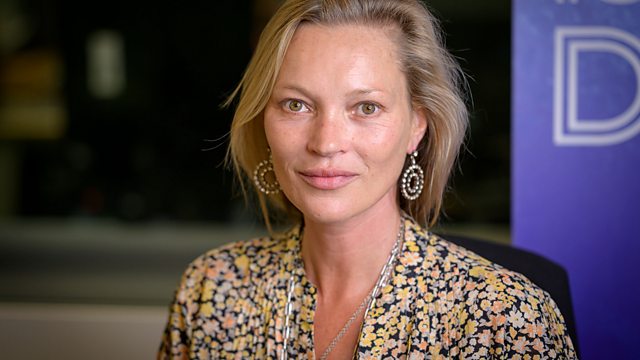 Kate Moss, model, shares the eight tracks, book and luxury item she would take with her if cast away to a desert island. With Lauren Laverne.

Kate Moss came to fame in the 1990s, and her distinctive look went on to embody the era of Cool Britannia. She has appeared on the cover of hundreds of magazines and starred in campaigns for many of the top fashion houses. She has made cameos on film and television and inspired artists including Lucian Freud, Tracey Emin and Marc Quinn.

Kate was born in Croydon in 1974. When she was 14, she was spotted at JFK airport by Sarah Doukas who signed her to her modelling agency. Two years later Kate was on the cover of the style magazine the Face – one of a series of photographs shot on Camber Sands by Corinne Day. The images were raw and natural and Kate’s slight, delicate build, in stark contrast to the curvaceous supermodel silhouette that had defined the decade, heralded a new era in modelling.

Kate moved on to high profile campaigns for the designers Calvin Klein and Marc Jacobs. In 1993 she appeared on the cover of British Vogue for the first time. Later her waif-like figure attracted criticism from some commentators who thought some of her photographs glamorised thinness.

In 2013 Kate received a Special Recognition award at the British Fashion Awards, acknowledging her 25-year contribution to fashion. Kate set up her own talent agency in 2016 and one of the agency’s first signings was her daughter Lila.