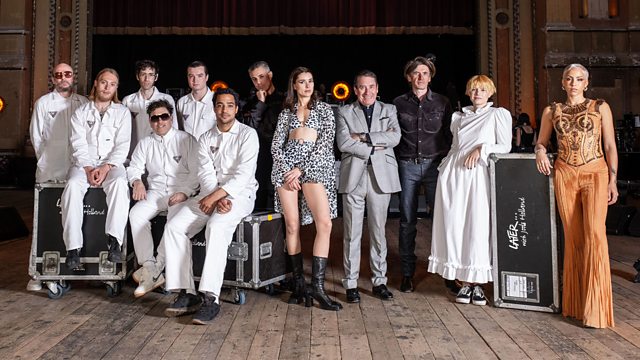 Jools welcomes a brand new collaboration consisting of Academy Award-nominated actress and singer Jessie Buckley and Brit Award-winning producer and guitarist Bernard Butler, who perform a couple of tracks from their forthcoming album, a collection of 12 mesmerising new songs entitled For All Our Days That Tear the Heart. They chat to Jools about both their collaboration and their choices from the Later... archives of performances by Leonard Cohen and Paul Buchanan.

There are three debuts on this week’s show, starting with south Londoner Poppy Ajudha, who has collaborated with the likes of Tom Misch and Nubya Garcia and who performs her single PLAYGOD from her debut album The Power in Us. The album has been described by critics as a 'genre fluid blend of jazz, R&B, soul, rock and pop' that offers 'powerful therapy in troubled times'. Poppy also performs a classic song she grew up listening to, with Jools at the piano.

Also making their debut are Brisbane electro-pop quartet Confidence Man, fronted by two powerhouse performers known as Janet Planet and Sugar Bones, who consider the likes of Bono, Noel Gallagher and Elton John amongst their fans. They perform their catchy, infectious tune Holiday, a song that perfectly encapsulates the sound of their latest album Tilt and 'taps into the hedonistic feeling of all the best EDM.'

And completing the line-up are London-based rock'n'roll band Warmduscher, who are renowned for their raucous, high-energy performances. Their lineup includes previous members of Fat White Family, and they have just released their fourth LP, At the Hotspot, produced by Hot Chip’s Joe Goddard and Al Doyle.