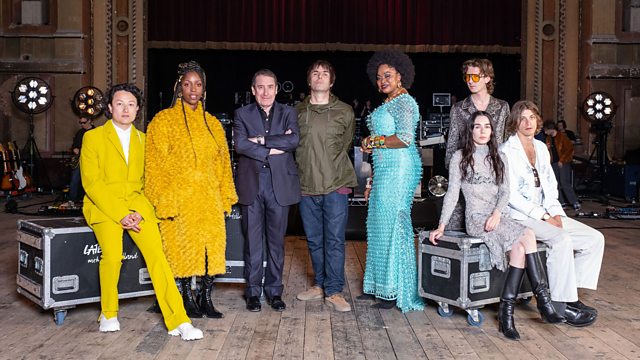 Jools is joined by rock‘n’roll legend Liam Gallagher, who performs a couple of tracks with his band from his forthcoming album C’mon You Know and an exclusive bonus track for BBC iPlayer. Liam also discusses a performance by Jimmy Cliff he has chosen from the Later... archives, as well as revisiting his debut on the show with Oasis from 1994.

From Limerick, debutante Sinead O'Brien shares her spellbinding poetry and songwriting on a performance of her track Holy Country, taken from her forthcoming debut album, which sees the Irish wordsmith experimenting with the form and shape of language.

And we welcome Belgian duo Charlotte Adigéry and Bolis Pupul, who make their debut on the show with their infectious electro-pop sound on a track from their album Topical Dancer, which was produced by fellow Belgians and electro band Soulwax.

And returning to the show is Malian singer Oumou Sangaré, known as the songbird of Wassoulou, to perform a couple of numbers from her 13th studio album, Timbuktu. Recorded between the US, Mali and France, it's a fusion of blues, folk, rock and traditional Malian music featuring a Malian lute known as a kamele n’goni.