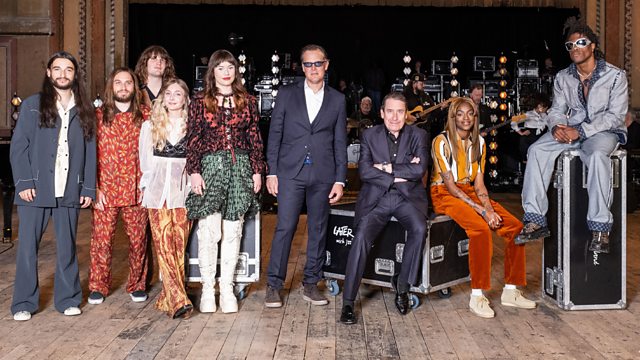 In a new performance space at the recently restored Alexandra Palace Theatre, Jools is joined by Isle of Wight duo Wet Leg, who rose to prominence last year and recently released their critically acclaimed number one debut record. They are returning to the show after performing their viral hit Chaise Longue last autumn.

Another returnee is US singer and blues guitarist Joe Bonamassa, who is stopping off in north London amidst his UK tour to perform a couple of tracks as well as chatting to Jools and picking a Peter Gabriel track from the Later... archive.

The first of two debuts in this new series comes from Nigerian-born, London-based artist Obongjayar, who has already featured on tracks by the likes of Little Simz and Pa Salieu. He steps into the spotlight to perform a song from his own debut album, Some Nights I Dream Of Doors, after a recent performance at the 6 Music Festival in Cardiff.

And following in the footsteps of past Later... debutantes Adele and Amy Winehouse, BRIT School alumni and south Londoner Cat Burns is also making her debut on the show with her Radio 1 playlisted and top three single Go.