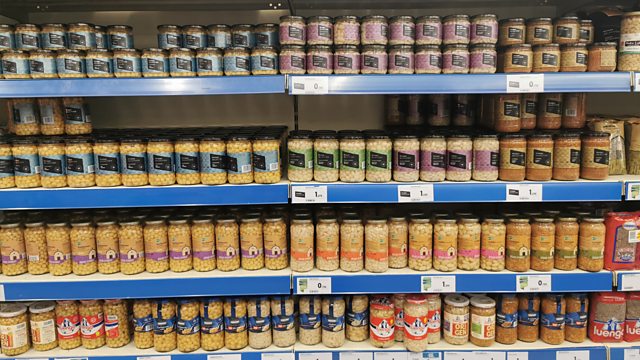 Beans Part 2: How Spain Does Beans

Ancient beans are a staple of the Spanish diet, and Spaniards live longer in part because of it. Sheila Dillon is in Spain to discover how they are grown, prepared and celebrated.

A few months ago, Sheila Dillon opened a glass jar of chickpeas in her kitchen. Their taste was so different from those she had been eating for years from cans, she took to social media to find out why. The story that unfolded in the comments led back to the Spanish, and their way of eating beans and other legumes.

In this programme we meet the people who grow, select, process and trade beans, and hear of a culture that respects legumes, where home cooks know how to flavour them, often cook them from dry, and their many varieties are on display in markets and supermarkets.

Sheila accompanies Spanish food importer and expert, Monika Linton, as she visits her processed and dried bean suppliers in the Navarra and Salamanca regions of Spain. Monika first set up her company Brindisa, bringing food from Spain into the UK, 35 years ago. She says legumes are for the Spanish what pasta is for the Italians.

On the lentil fields of the Salamanca plains, we hear how farmers manage relatively small plots of land, and how the beans are used in rotation with other crops in order to both feed people, and nourish the soils.

However not all beans eaten in Spain are grown locally. In Madrid, Mario Castellanos from Legumbres Castellanos, his family business, explains why the country still relies heavily on imports from other nations.

Presented by Sheila Dillon
Produced in Bristol by Natalie Donovan

Beans Part 1: Are Legumes the Answer?