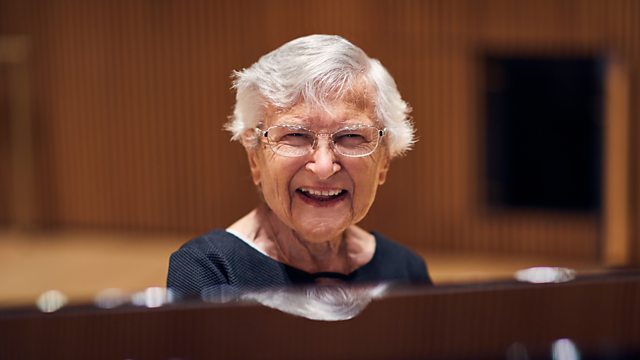 Sara Mohr-Pietsch talks to artist Alison Jackson and composer Richard Thomas about their new collaborative work, The Covid Variations: A Piano Drama, which is on at Birmingham Rep.

Sara Mohr-Pietsch talks to Ruth Slenczynska, the last living pupil of Rachmaninoff, from her home in Pennsylvania ahead of releasing a brand new solo piano album entitled My Life in Music. She reminisces about her childhood as a prodigy, connecting with her audiences, and performing still in her ninth decade.

The writer, musician and composer Richard Thomas, and contemporary BAFTA and multi award-winning artist, photographer and filmmaker Alison Jackson, join Sara to discuss their new collaboration at the Birmingham Rep – The Covid Variations: A Piano Drama – which takes the form of a unique film-and-concert-in-one depicting everyone from Donald Trump to the Royal Family, and provides an imaginary glimpse into the lived experience of celebrities during the pandemic.

As Mali's military leaders expel the French ambassador for comments made by the French foreign minister about the transitional government, ethnomusicologist Lucy Duran and the BBC’s reporter Lalla Sy explain more about the fragile situation inside the former French colony following the imposition of sanctions by the Economic Community of West African States. We hear, too, from Malian musicians including the singer and guitarist Vieux Farka Touré, the balafon virtuoso Fodé Lassana Diabaté, and kora player Ballaké Sissoko, as they describe how years of civil war, military coups, and insurgencies by Islamist militants are collectively impacting music making in the country.

And, as we celebrate the centenary of the publishing of James Joyce’s modernist masterpiece, Ulysses, scholar Katherine O’Callaghan explains the musical references which litter the work and how music informs Joyce’s language, while the composer Betsy Jolas remembers accompanying James Joyce at the piano as he sang.

John Williams at 90, Ivan Fisher and tributes to George Crumb