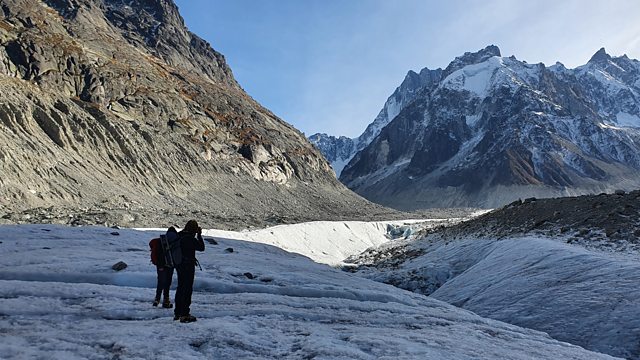 In Search of the Sublime

High in the mountains of Chamonix-Mont-Blanc, artist Emma Stibbon RA explores the idea of the sublime in 19th-century landscape painting and its power to move viewers today.

As the Alps undergo visible changes due to climate warming, we follow artist and Royal Academician Emma Stibbon to Chamonix-Mont-Blanc in France.

Emma works primarily in drawing and print on paper depicting fragile environments that are undergoing transformation. She does this through location-based research often working alongside geologists and scientists.

Whilst conducting her own fieldwork in Chamonix, Emma explores the rich history of British landscape artists who came to the region in search of sublime views. With crampons and ice axe, she hikes up the Mer de Glace glacier on the Mont Blanc Massif with Jean-Franck Charlet, a sixth-generation Chamonix guide, to sketch in the same spots as JMW Turner on his 1802 tour. Rather than a sea of magnificent white seracs, she witnesses the stark retreat of the glaciers. However, at the top of the Aiguille du Midi - 12,500 feet up - the spiky, cinematic, saw-tooth granite peaks still take our breath away.

The Alps played a key role in the development of the sublime in the late 18th and early 19th century. Chamonix became a mecca for tourists, mountaineers, and scientists; in 2021 the Compagnie des Guides - the world's oldest guiding association - celebrates its 200th year. Romantic artists, poets and writers also flocked here on the tourist trail, in search of ghostly glaciers and majestic peaks. We learn that these historical depictions of the Mer de Glace are being used by glaciologists in modern-day research.

The Romantics sought to evoke a mixture of awe and terror in their depictions of nature, but the viewer was usually situated in a position of safety. Painters represented man as small and powerless in the face of Nature's great majesty. However, in a 21st-century sublime, Emma argues, we can no longer look out on nature with assurance, due to a critically changing climate; we are now firmly situated within the danger. But perhaps today the emotional power of art can be used to move hearts and minds when science alone cannot.

This Land of Words and Water