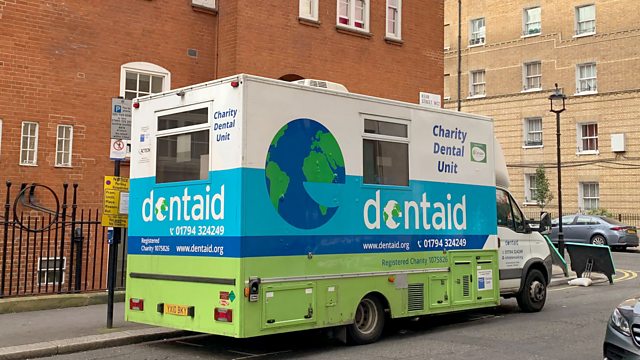 Nick is homeless and has unbearable toothache. He's even tried to extract the bad tooth himself. He finds a mobile dentist van and joins the queue. But will he get an appointment?

Nick has an unbearable tooth ache and has tried, and failed, to extract the bad tooth himself.

He's homeless and, like many others, can't access NHS dental care. When a mobile dentist van arrives at a homeless support centre, Nick joins the queue. He's desperate but he was too late putting his name on the list. Will he get an appointment?

The charity van roams Britain with a dedicated brigade of volunteer dentists, filling in wherever the need is greatest. As it parks up outside the support centre in Hastings, we hear the stories of those seeking help. There are many hoping to be seen.

Presented by Grace Dent and produced for BBC Audio in Bristol by Eliza Lomas.

After the Bridge - Catch-up

See all recipes from The Dentist Van