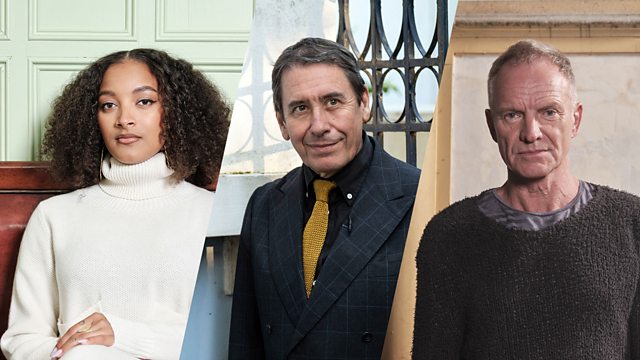 From EartH Hackney in London, the former frontman of the Police, Sting, performs a track from his upcoming new album The Bridge and tells Jools how it feels to have celebrated a milestone birthday, and why he loves Sam Fender and Shaggy.

Back at his musical home in south London, Jools also chats to one of the biggest stars of the UK's contemporary jazz scene, Nubya Garcia. They discuss recently shortlisted Mercury Prize album Source and her debut at the BBC Proms with a concert dedicated to her brand of ‘eclectic, danceable, political jazz’ that draws on influences from Africa, Latin America and the Caribbean.

And the show also introduces two hotly tipped artists. First up is Isle of Wight duo Rhian Teasdale and Hester Chambers, aka Wet Leg, who perform their summer viral hit Chaise Longue. And rising south London singer-songwriter Lola Young visits Jools’ studio to perform an acoustic version of her track Fake, which she describes as ‘like a scene from a Tarantino movie’.