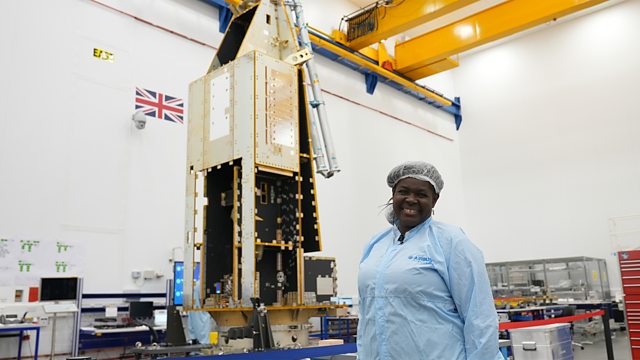 The Sky at Night team visit the companies spearheading the boom in Britain's space industry, a sector with an annual income of £16.4bn and which employs over 45,000 people.

Britain’s space industry is booming. According to UK Space Agency, its annual income now stands at £16.4bn, and it employs over 45,000 people. Britain has always been a leader in the world’s aerospace industries. Airbus’s huge manufacturing plant in Stevenage was originally owned by de Havilland, where they made ‘Blue Streak’, Britain’s intercontinental ballistic missile which became part of the ESA's 'Europa' rocket. Before becoming part of Airbus, the business then called Astrium had focused on satellites and were Maggie’s employers.

Maggie meets Liz Seward who explains that while over half their business is building communications satellites, they are also involved in research instruments too. One of their recent creations – the Solar Orbiter – has not yet reached its final operational position in space, but has recently sent back spectacular pictures of coronal mass ejections. Back in the factory, Maggie sees a new satellite in the making. ‘Biomass’ is a European Space Agency project that will measure the amount of carbon trapped in the earth’s flora, building up a comprehensive 3D picture of the planet’s greenery. This is done using a specific type of radar that uses comparatively long wavelengths and consequently requires a huge 15m receiver – which in turn creates a huge challenge for its designers.

There are a vast number of job types required to build a spacecraft – and Maggie discovers perhaps the most surprising – that of crystal maker. Airbus in Stevenage is the manufacturer of the world’s purest quartz crystal. It is needed several times over in every satellite for calibration purposes. Because quartz vibrates at a specific frequency when an electrical current is applied to it, it is a vital constant in a world of wandering electronic systems. To be sure of supply and quality, Airbus makes its own. It’s an expensive commodity – a house-brick-sized crystal of space quality quartz is worth tens of thousands of pounds.

About 80 miles west of Stevenage, and at the other end of the business scale, Chris visits Oxford Space Systems, whose CEO Sean Sutcliffe explains that while microsatellites are opening up the industry to more companies, they pose challenges of their own because of their size. These satellites have tiny spaces on the rockets that launch them, but need quite sizeable antennas and receivers to communicate with people and machines on earth. This is OSS’s business – to provide novel engineering solutions in packing up and unfurling these structures. They combine the latest materials science with knitting and origami to produce antennas that extend to hundreds of times their packed length and receivers that unfurl like beautiful hi-tech flowers.

Of course, all spacecraft need rigorous testing before deployment. Maggie visits RAL-Space, who provide these services. She discovers that not only the conditions of space must be replicated in huge vacuum chambers, but that the experience of being launched must also be gone through. This means being shaken on a vibration table that can be programmed to replicate the precise vibration profile of the launch rocket and being shocked to simulate the firing of the explosive bolts that separates the spacecraft from the rocket. This is done by attaching critical components to a steel plate that then has a steel projectile fired at the plate’s opposite side.

So far, so good. But the success of the satellite has brought with it a huge problem. Dead and broken satellites are clogging up the available orbits and could makes things even worse if anything crashes into them. Chris visits multinational Japanese company Astroscale who have come up with a solution in the form of another satellite, controlled from their mission control in the UK. Their spacecraft – ELSA-d – is a proof of concept for a satellite retirement service, which it is hoped could clean up the dangerously cluttered low earth orbits

Pete Lawrence is on hand to tell us about the surreally beautiful phenomenon of noctilucent clouds, ice crystals in the upper atmosphere lit by the sun from beyond the horizon. The effect has become more common in recent years, because of the increase in rocket launches, which leave water in their wake as they leave the Earth.

Finally, Maggie shows Chris the final piece of evidence that Britain’s space industry is going from strength to strength, when they visit the new National Satellite Test Facility. This purpose-built, awe-inspiring, cathedral-sized building is capable of comprehensively testing the largest satellites from the UK and abroad. It houses a 20m-long vacuum chamber with a 7m diameter, the country’s largest faraday cage and vibration tables large enough to test whole spacecraft. And a scoop for the Sky at Night: it’s the first time that TV cameras have been allowed into the facility, which is scheduled to open in the second half of 2021.

ET and the BBC