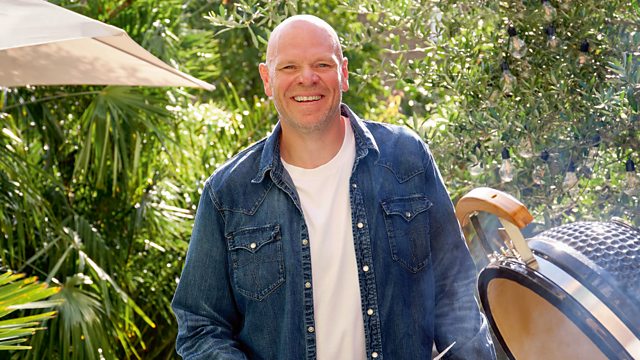 Tom Kerridge: A Life Through Food

Chef Tom Kerridge talks pubs, pirate ships and being a 'people person' as he shares his Life Through Food with Sheila Dillon.

Tom Kerridge is probably best known as the first chef in the UK to be awarded two prestigious Michelin stars for food served in a pub, not even a year after opening 'The Hand and Flowers' in Marlow in Buckinghamshire in 2005. Then he was in his early thirties; Known, in the business, for his hard work ethic and hard partying.

Today, he's given up the booze and the partying, but as Sheila Dillon finds, he's as driven as ever with a string of restaurants, a food festival company, a catering company, a TV production house, a shelf full of cook books and many BBC food TV series' to his name. Not to mention advocating on a national level for the hospitality industry and working with footballer Marcus Rashford to do his bit to end child food poverty.

In line with Tom's latest BBC TV series 'Saving Britain's Pubs with Tom Kerridge', Sheila finds that the democratic environment of the pub has shaped Tom's life and his career in hospitality. And hears why these important community spaces need investing in at all costs.

Presented by Sheila Dillon.
Produced in Bristol by Clare Salisbury.

Eat Your Art Out: How Art Makes Us Eat