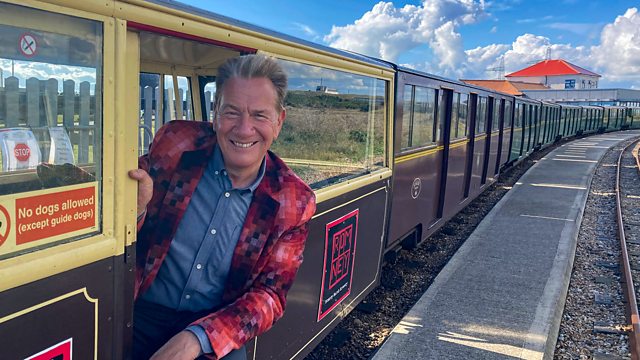 Michael visits the village of Ditchling, once the home of a community of Catholic artists, before heading to Bexhill-on-Sea to learn about the role of ARP wardens during the war.

Starting in Hassocks, Michael makes his way to the beautiful Sussex village of Ditchling, where, between the wars, a Roman Catholic community of artists made their home. Michael finds out how they made their mark on the village, the capital and the nation’s railways.

In the seaside town of Bexhill-on-Sea, Michael hears of the work of the wartime air raid precautions wardens, immortalised in the BBC series Dad’s Army. He discovers Bexhill was heavily bombed from the air and became a target of the Nazi invasion plan, Operation Sealion.

Michael takes the train north to the village of Burwash, where he finds a magnificent Jacobean house called Bateman’s. Its occupant - until 1936, when Michael’s guidebook was published - was the most famous writer in the country, Rudyard Kipling, author of the Jungle Book. Michael learns about his life and work.

The delightful Kent and East Sussex heritage railway conveys Michael from Bodiam Castle through the scenic Rother Valley to Tenterden. After a tasty on-board snack of Kentish cobnuts, Michael heads for Benenden and the imposing home between the wars of the Reverend Collingwood ‘Cherry’ Ingram. In the beautiful gardens of the Grange, Michael discovers how Ingram is credited today with introducing and preserving rare varieties of Japanese cherry trees in Britain and rescuing them for Japan.