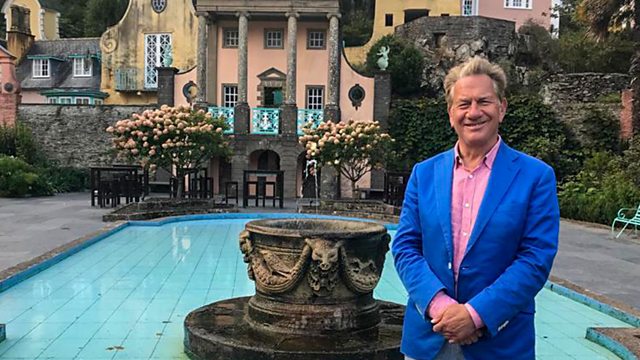 Michael heads across the Welsh mountains of Snowdonia to the coastal towns of Porthmadog, Portmeirion and Barmouth.

In the Welsh mountains of Snowdonia, Michael Portillo reaches an abandoned mine, where in 1940 the wartime government sought sanctuary for the National Gallery’s priceless art collection. Michael hears how, as invasion appeared imminent, great masterpieces were transported by train and lorry to be stored hundreds of feet beneath the ground in a natural granite bunker.

At Tan y Bwlch, Michael meets 'Blanche', who used to haul slate at Penrhyn quarry and was built in 1893. Now beautifully restored, she takes Michael on a memorable ride on the oldest narrow-gauge line in the world, the Ffestiniog Railway.

In the harbour town of Porthmadog, Michael investigates the Welsh origins of a man forever associated with the Middle East, Lawrence of Arabia.

On the Welsh coast at Portmeirion, Michael discovers a fantasy village, begun in 1925 by architect Sir Bertram Clough Williams-Ellis. The unique folly with its colour-washed buildings and palm-lined central square is set in 85 acres of ornamental gardens. It became a favoured destination for the rich and found lasting fame in cult television series The Prisoner. Michael finds himself pursued by a large balloon and sucked into a game of human chess.

Further south at Barmouth, Michael encounters a different group of holidaymakers also drawn to the Welsh coast. Trainee Jesuits, members of the largest male order of the Roman Catholic Church, flocked to Barmouth during the interwar years to take a break from their strict regime of studies. Michael meets two present-day scholastics.