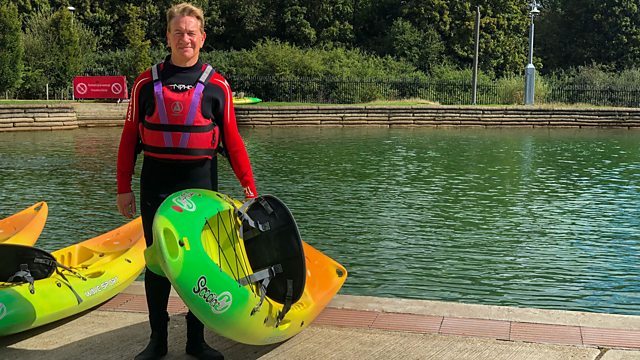 Michael’s Bradshaw travels resume in leafy Hertfordshire, where he attempts a canoe slalom course, visits the estate of Dame Barbara Cartland and hears the shocking story of the R101 airship.

Michael Portillo’s Bradshaw travels resume in leafy Hertfordshire, where he attempts a canoe slalom course at the Lee Valley White Water Centre, built for the London Olympics in 2012. Former competitive canoeist Sue Hornby tells Michael how British canoeists first competed at the politically-charged Berlin Games in 1936. Britain won a gold and a silver medal here at the London Olympics, and Michael’s hopes are high as he takes to the paddling lake.

Travelling north, Michael reaches Hatfield and the country estate of the queen of romance and author of 723 books, Dame Barbara Cartland. The novelist’s eldest son welcomes Michael to Camfield Place with a gift for his onward journey, 'A Train to Love'.

In Stevenage, Michael learns how, in 1935, a new enterprise boosted production of the nation’s daily loaf with a factory in the town. Allied Bakeries now produces 1.8 million loaves a week, and Michael marvels at the scale of the operation while enjoying the smell of freshly baked bread.

Crossing into Bedfordshire, Michael reaches Sandy, from which he heads for Cardington, where the level countryside is dominated by two breathtakingly vast sheds. In Hangar No 2, Michael hears the shocking story of the 'Titanic of the skies', the R101 airship, which crashed on its first long haul voyage, killing all aboard.