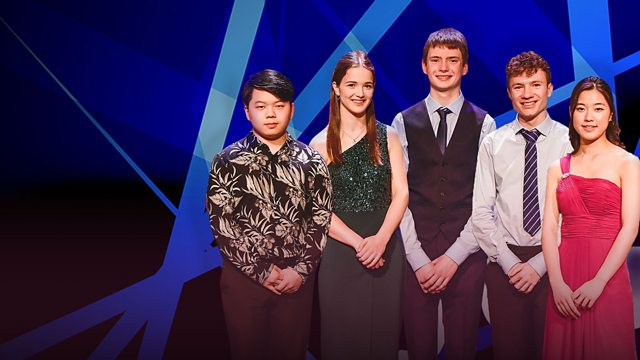 Three exceptional musicians compete for the title of BBC Young Musician 2020. Each will perform a concerto with the BBC Philharmonic Orchestra, conducted by Mark Wigglesworth.

The long-awaited grand final of BBC Young Musician 2020, delayed for a full year, will see three exceptional musicians compete for one of music’s most coveted titles. The finalists have had to wait for their moment in the spotlight, but it’s certain that the brilliance of the music-making will be even more special as the twenty-second edition of the contest reaches its much anticipated conclusion.

The grand final takes place at the Bridgewater Hall, Manchester, where each finalist will perform a full concerto with the BBC Philharmonic Orchestra and celebrated British conductor Mark Wigglesworth. Presenters Anna Lapwood, Josie d’Arby and Jess Gillam – herself a finalist in 2016 – are on hand to guide you through proceedings. Joining Anna with expert analysis is the 1980 winner of the title, oboist and conductor Nicholas Daniel.

A judging panel featuring some of the UK’s leading musical figures is tasked with making what is always a difficult decision. They are clarinettist and composer Mark Simpson, winner of BBC Young Musician in 2006, British-Iranian experimental composer, turntablist and artist Shiva Feshareki, principal conductor of the BBC National Orchestra of Wales, Ryan Bancroft, award-winning composer and performer Errollyn Wallen, MBE, and returning to chair the jury, the chief executive of performance venue Saffron Hall, Angela Dixon.

As well as the performances by the three finalists, we will also see a return to the competition for a very special performance by the 2018 winner, pianist Lauren Zhang.

Who will follow in her footsteps? All will be revealed at the end of what promises to be a thrilling finale to BBC Young Musician 2020.

See all clips from Final (4)