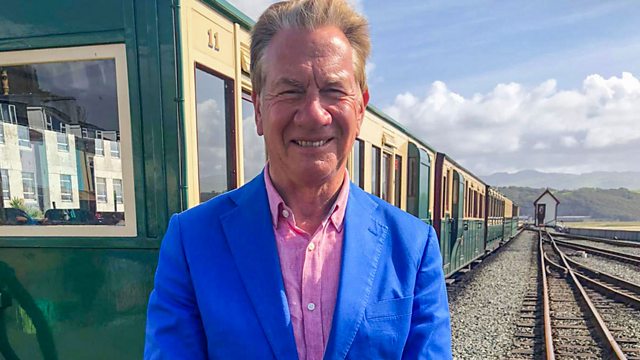 Michael Portillo resumes his tour of the Home Counties in the picturesque and historic county town of Guildford.

Michael Portillo resumes his tour of the Home Counties in the picturesque and historic county town of Guildford. His 1936 Bradshaw’s guide commends its 'fine old castle keep' and guildhall but makes no mention of its hilltop cathedral. Michael meets head guide Janet Matthews to discover the origins of the first Anglican cathedral to be built on a new site in the south of England since the Reformation – begun in 1936. He finds splendid architecture and modern materials have combined to produce a gloriously open building full of space and light. Michael climbs its 160 foot tower for a panoramic view of Surrey.

Michael’s next stop is Chilworth, from which he follows his guide to Newlands Corner on the slopes of the North Downs. At this popular beauty spot, the famous crime writer Agatha Christie disappeared, sparking a massive search and a tabloid frenzy. A Christie biographer pieces the puzzle together for Michael.

Heading west across the county, Michael reaches the Georgian market town of Farnham with its 12th-century castle, once home to the bishops of Winchester. Intrigued by his Bradshaw’s reference to a famous Farnham painter, WH Allen, Michael joins the artist’s great-great-niece in the castle’s splendid gardens to learn more about him. A kind Farnham artist encourages Michael to commit the castle to canvas in his own way.

After a luxurious night at the castle, Michael crosses into Hampshire to reach Aldershot. At the home of the British Army, he hears how in the years leading up to the World War II, the town began to receive conscripts for military training.